The legend of Chikuwa 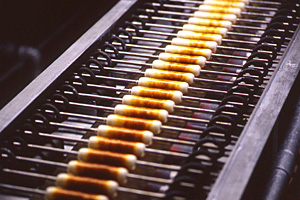 Chikuwa is a traditional Japanese food shaped like a 12cm tube. It is about 2.5cm in diameter and characterized by its center hole. If it is not about a 12cm-tube with a center hole, then it is not Yamasa chikuwa.


It is always best to check that you have the real thing. If you don't, then you may not be eating authentic traditional Japanese food.


Chikuwa is made from ground fish meat seasoned, wrapped around a bamboo spit and cooked. After cooking, the spit is removed and the hole left open. Nowadays, the bamboo spit has been replaced by metal and the chikuwa are rotated by machine as they cook. The cooked chikuwa are cooled, wrapped and shipped. Chikuwa are usually not eaten fresh cooked, rather they are better when served chilled.

How do you eat chikuwa? 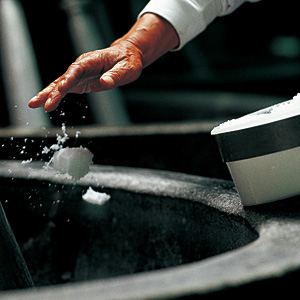 Chikuwa is often eaten as a snack with beer or Japanese sake dipped in soy sauce with no additional preparation. Chikuwa taste best when eaten this way.


In addition to being a tasty snack, chikuwa makes a regular appearance on the Japanese dinner table. For breakfast, lunch or dinner, chikuwa makes a delicious side dish for any meal. But of course you don't want to overdo it, chikuwa is usually not eaten three times a day. It varies by location, but in Toyohashi, families serve chikuwa one or two times a week.


Chikuwa will keep in a refrigerator for about a week and can be eaten with no preparation. However for a couple of days after this time,chikuwa is still delicious when stewed in soy sauce and broth.

How was chikuwa born in Toyohashi? (The history of chikuwa) 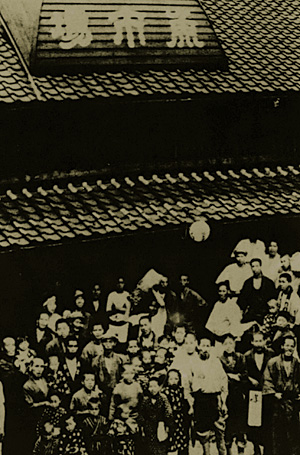 Chikuwa is mentioned in a book from the Muromachi Era (around 1523). However, it is reported to be even older than that. It is said that chikuwa originated as "ground fish meat coated on the tip of spears, cooked and eaten."


In those ancient days, the founder of Yamasa Chikuwa, Zensaku Sato, a fish wholesaler doing business in Yoshida (the old name for Toyohashi), made a visit to Konpira Sama Shrine in Shikoku. The famous food from that area was chikuwa. It was quite unique and, after tasting it, quite delicious, he thought. Because Toyohashi was rich in marine products, there was an abundance of the fish necessary as the raw material.


Zensaku returned home and immediately set to producing chikuwa. Zensaku was very particular about the fish he used and was meticulous about the taste, so the popularity of his chikuwa soon grew. Starting as a seller of fish products in the year 10 Bunsei, Yamasa Chikuwa began making chikuwa and is now operated by Zensaku Sato's sixth generation descendants.


Yamasa Chikuwa Co.,Ltd. is located in Toyohashi, Aichi. Toyohashi is just about half way between Tokyo and Osaka. With a sales network of 130 shops mainly in Aichi Prefecture,Yamasa Chikuwa sells about 200,000 sticks of chikuwa every day.

Chikuwa is a healthy food. 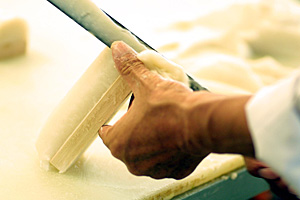 Chikuwa is made from only the freshest fish. It is a healthy food, good for digestion and contains an abundance of vitamins and minerals.


What kind of Japanese foods are you familiar with? Tempura, sushi, sukiyaki are all famous throughout the world. But, if you ever visit Aichi Prefecture,be sure to try Yamasa Chikuwa-you will never find a better-tasting Japanese specialty anywhere!